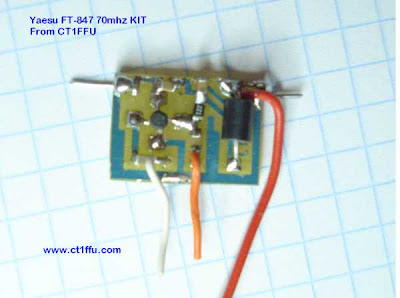 Last Spring I decided to buy a Yaesu FT-847. Using an all mode all band radio, operation becomes much easier and give better accommodation on shack however, I soon got frustrated with its reception as the signals were much weaker then the ones received with my home-made X-verter (dx-70-G4DDK design).
I decided to look on web for a modification and Marc's, PA1O BPF, was a good to start. Marc’s article, convinced me with the good results on filter modifications as well as the simplicity of those changes. After Marc’s modification the radio became better, but still not with a satisfying RX performance . FT-847 has a build in preamp, but it seems to have poor gain at 70mhz, so I decided to add another preamplifier stage.
I have looked carefully on circuit diagram trying to find the right place to insert a amplifier which wasn’t however easy, but I realise that the band-pass-filter, a Chebyshev, could be rearranged and have the preamplifier inserted there . Results were clearly better as sensitivity is concerned and in many comparisons with transverter it was easy to see the improvement.
After I published a small article on www.70mhz.org these modifications were reproduced with success by others. The results are good and hundreds of boards are now installed world wide on FT847s Later, as per many requests, I decided to make a KIT available. This KIT is very easy to install and anyone with a bit of radio/electronics experience can do the job easily.
Laboratory tests made by GI0GDP and CT1BXT shown that once fitted the pre-amp the 70mhz RX achieve similar sensibility as on 50 MHz, even without PA1O BPF modification.
The design.
I decided to use a MAR6 (MMIC from MiniCircuits) because of it’s 50 ohm impedance; stable amplification, 22dB
gain and noise figure low enough for the application. This amplifier uses the typical configuration and bias and is placed in the in the BPF which was rearranged as seen in fig1.
Brief performance of the FT847 after preamp fit.
Since the radio has some 1.5 dB loss on the PA filter and still some more few dB in the subsequent HPF filter on the daughter board the lowest NF achievable is still quite limited by those factors. NF at 70 MHz is now about 7 dB (note the 15.5 dB NF the radio had originally) which makes perfect sense taking in consideration the circa 2.8 dB NF of the MAR6.
Using a lower NF device would bring just a bit better NF but as per the loss limitations described above, without further changes into the radio, performance would not get much better than this by improving the preamplifier alone. This 7 dB NF could be also expressed as a sensitivity of about 0.1 uV for S/N of 6 dB at 2.8 kHz BW.
Preamplifier with surrounding existing components: 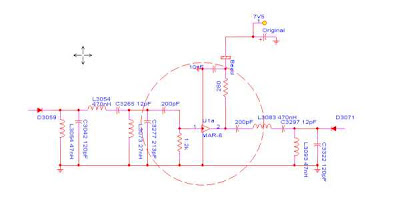 Schematic of the add on board: 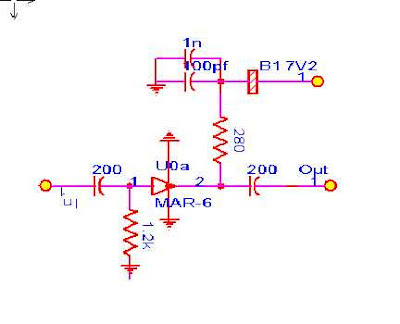 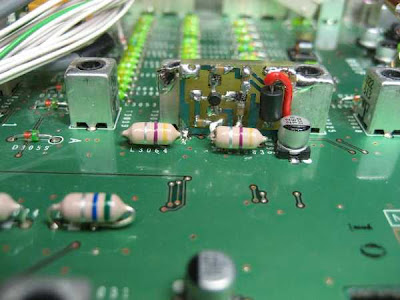