The Idea:
M0MTJ VHF Antenna Matching unit. Here's a real 'Heath Robinson' piece of home brew experimentation all made from components found after a rummage in the junk box!
I have a little Wouxun 70 MHz handheld which I would really like to connect to a dedicated external antenna, but unfortunately I have no more space for further antennas outside! I therefore wondered if I could possibly use my 50 MHz Coaxial Dipole antenna for use on 70 MHz
On checking the SWR with an antenna Analyzer at the shack end of the West flex 103 feeder cable, I found that the reading was, as expected, quite high and an unsuitable match to transmit into. I therefore wondered if I had a few parts in the 'junk box' that I could use to make an Antenna Matching Unit ("ATU").

The Design:
I decided that I would try a Pi Match circuit, which I drew out as can be seen in the diagram below: 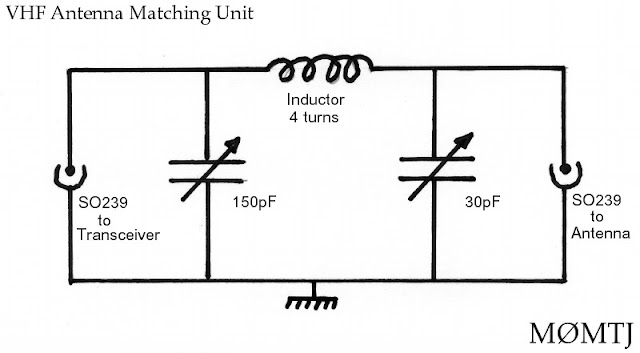 M0MTJ VHF ATU:
VHF Antenna Matching Unit for 70MHz - could be adapted for 50MHz
(The values of the variable capacitors are approximate)

Reality Check:
I realize that using any Antenna Matching Unit will only provide the 50 Ohm match that the radio wants to 'see' and that, especially at VHF frequencies; the losses in the aerial system (antenna and feeder) could well be very significant indeed. Also the antenna's radiation pattern at 70MHz is unknown so may be detrimental to attained coverage. However, at least it may allow the use of the 4 Meter radio for strong local contacts where otherwise no contacts at all would be possible.
I was happy to find that once the ATU had been built, it only took a few calls to obtain a local contact. Sure enough, the signal report from my 5 watt handheld through the ATU and 6Meter band aerial was not amazingly strong - but it was a contact - and I was pleased!
The power handling will depend on the type of variable capacitors used. With the air spaced capacitors that I used, the unit should be able to handle 10 or 20 watts, maybe more.
The circuit could be adapted for use on 6 Metres (50MHz) by adjusting the size of the inductor slightly. Slightly larger maximum value variable capacitors may also be required; if multi-gang variable capacitors are used, then changes can be achieved by adding or removing the number of gangs that are wired in parallel.

Practical Construction:
I set about looking for a couple of low value (approx 100pF) tuning capacitors, some thick wire suitable for making a small inductor, a metal enclosure, two SO239 sockets, a couple of knobs and the various other items in my junk box.
I found all of these items: The SO239 chassis mount sockets were brand new, purchased from W H Westlake at the Telford Rally the previous year. The two tuning capacitors were left over from some TRF receiver projects many years before. The metal box was a well-used and worn item bought for a couple of pounds at the Wolverhampton ARS table top sale a few years earlier. When purchased it was also filled with a number of small value air spaced trimmers, some small inductors and various nuts and screws. One of the inductors would be very useful for this project. I could not find two matching knobs - so a mis-matched pair was pressed into service!
The two tuning capacitors were identical, 3 gang items. I am not sure of their exact value, but my guess is that they might comprise of two 30pF gangs and a 50pF gang - or thereabouts.
The variable capacitor on the transceiver side of the circuit has all three gangs wired together in parallel to provide a higher value of somewhere around 100 to 150pF at maximum value. The variable capacitor on the antenna side of the circuit is lower value, so I used just one of the smaller gangs. The maximum value is probably around 25 or 30pF.
The values given in the diagram above are therefore approximate, so just try anything in the junk box of similar value - in the true spirit of amateur radio experimentation!
Initially I simply wired the circuit together on the desk top without installing anything inside the metal enclosure just to test the theory. Initially I tried an inductor with 3 turns, but could not obtain a low enough match - the minimum SWR being about 3:1. I therefore tried a different sized inductor of 4 turns. It still was a little out, so I pulled the windings apart a little and found that an SWR of between 1:3 and 1:6 could be achieved from 70.0MHz to 70.5 MHz. I also tried the circuit in a T configuration, but found that, in this circumstance, the Pi Match circuit worked better.
I then set about installing the components into the metal enclosure. This box had a small chassis plate held in place by a machine screw and spacer at each corner that raised it above the level of the base of the box. I decided to use this as it would place the shafts of the two variable capacitors at about the centre of the front face of the case.
The capacitors had small threaded holes in the base so I looked around for some suitable, small machine screws. I then drilled four holes in the chassis plate to enable the capacitors mounted in suitable positions.
Once the capacitors were mounted on the chassis plate I could then measure and mark out the positions of the holes in the front panel. I also marked out the positions of the holes required for the SO239 sockets on the rear panel. (The box must have been used for several other projects in the distant past since there were already a number of holes present).
Once the holes were drilled, I mounted the SO239 sockets using small zinc plated machine screws and nuts, including a solder tag on one screw of each socket. Next the chassis plate was fitted inside the box using the spacers, machine screws, plain washers, shake-proof washers and nuts.
I then soldered the 4 turn inductor coil across the centre pins of the SO239 sockets and also soldered a short, red, wire onto each centre pin. The wire from the centre pin of the transceiver side socket was soldered onto the nearest variable capacitor which has the three gangs connected together in parallel.
The wire from the centre pin of antenna side socket was soldered onto a single gang of the other variable capacitor.
Next, a black wire was soldered to each of the solder tags on the chassis mounting points of the SO239 sockets. The other end of each wire is soldered on to the chassis of the nearest variable capacitor. Finally a knob was fitted to the brass shafts of each capacitor and four self-adhesive feet fixed to the base of the enclosure. My knobs do not match, but I will search out another smart pointer knob.

The Finished Unit, Testing and Use:
Once the construction was completed, I connected the aerial to the Antenna socket and the Antenna Analyzer to the Transceiver socket. I then adjusted the two controls until I found the best match at around 70.4 MHz
I found that the SWR was adequately low across the whole of the 4 Metre band from 70.0 MHz to 70.5 MHz Therefore the controls would not require regular adjustment, so I marked the positions of the knobs for future reference.
I then went on to make some 4 Meter contacts - proving the usefulness of this little "Heath Robinson" project!
My construction methods are hardly 'best practice' for VHF frequencies and I am sure could be improved upon for better efficiency.