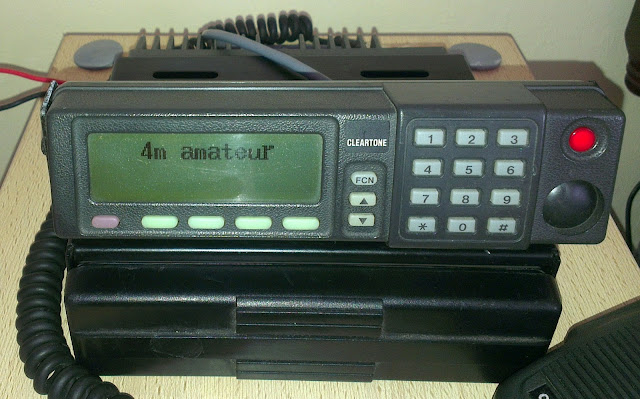 A few weeks ago I was at the Athlone Radio Rally, looking around I spotted a guy selling PMR radios, as I have an interest in using ex-PMR radios on VHF and UHF and the radios they guy was selling were unknown to me I went over for a look.
He explained that they were Cleartone CM-7200 radios programmed up on 70Mhz and that they were dual mode and working on AM and FM...
This immediately got my attention, where I do have a nice collection of 4m radios I do not have one that does AM and FM.
They guy's name is Artur EI7GMB, he is from Poland and now living in Galway, very knowledgeable guy and very willing to share his knowledge.
Artur gave me a demo of the radio, all its user changeable features like adjustable squelch, display brightness, contrast, scan etc.... one of the features I like is the SCAN, I can go into the scan function and pick the channels I want to scan through and omit the ones that I do not want to... very handy if you only want to listen to specific channels...
The radio itself is a remote head radio, so you could put the radio in the boot or under the seat of the car and put the head on the dash, or you could do what I have done and mount it together as a base radio, all the hardware is supplied from Artur.
On the front of the radio there is a keypad which when you press the "FCN" (function) button then press channel number, this will pick the channel you want to be on, there are also 5 buttons under the display, the red one to the left is the "MON" squelch off/on button, actual squelch level can be set via other function,I will explain that further down. Next to the  squelch is the "SPK" button, very handy, I like this as it mutes the radio and kills the RX audio, saves you from turning down and back up the volume, next to that is the "SCN" scan button.

Now to go into one of the "MENUS", this is done by holding down the "FCN" button for 2 seconds:
FCN01 is "MAN DOWN" which is not used.
FCN02 is "SCAN LIST", enter this and you can add or delete the channels you want to scan.
FNC03 is "DIMMER LEVEL".
FNC04 is "EXIT FUNCTION" this brings you back to radio display.

The second set of Menu Functions is done by turning off the radio, then turn on the radio by the red button on the top right hand side while holding down the "FNC" button for 3 seconds, this will give you the following options:
FNC11 is SQ LEVEL, enter this to adjust your squelch level, 0 is off to a maximum of 7, I keep mine at level 1.
FNC12 is CONTRAST.

The radio itself is very rugged, and has a good professional feel to it, the head has the microphone attached to the back of it by a short lead and microphone socket, the microphone can be removed when not in use, the radio is attached to the head with a long lead which can be disconnected from both the radio and the remote head, also something I found very handy was that the extension speaker plugged into the back of the remote head via a normal extension socket, no need to have another lead going from the body of the radio to the front of your car....

Artur has programmed all the frequencies in with the display showing what the radio is TX/RX on, for example 70.400 FM shows as exactly that and 70.275 AM shows as what it is. He also has all AM channels programmed in 5KHZ steps and FM channels done in both 5KHZ and 12.5KHZ steps.
He has also programmed in the 88.8Hz CTCSS tone on EI4FMG which shows up as EI4FMG on the display so you will know that you are on the 4m Gateway, he also has programmed the CTCSS tone on the 4m Crossband link in Cavan as well as the 4m Simplexer in Cork. 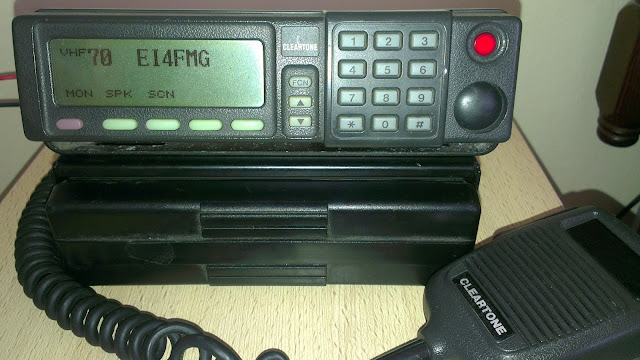 I have used the Cleartone radio now for a few weeks, had it on instead of my Anytone 4m Radio, I am getting great results with both the TX and RX quality, I brought the radio with me to Aidan GI7FHC just outside Newry last Saturday night to compare it's RX against his Anytone, the sensitivity is very good on receive, I used it to access EI4FMG and had no problem receiving it, the Cleartone is as sensitive as the Anytone. Unfortunately the band was quiet and we did not make any contacts with any of the 4m operators up there, probably something good on the TV!!!!

I was that happy with the radio I bought a second one which I am using on EI4FMG all the time now, I am getting better audio reports through the gateway than any of my other 4m radios, the audio has been reported back as punchy but also of having more natural tones on it...

Here is the technical stuff:

Artur’s test results:
Input voltage 11.5-16V
Current drain
STD 400mA
TX 4.90A FM @25watt
TX 5.03A FM @25watt + CTCSS
TX 4.07A AM @10watt 80% mod
RX sq open 470mA low volume / 520mA max volume
FM tx power 25 watt
AM tx power 10 watt (both adjustable down to 5 watt, AM behaves best at 6-8watt range and degrades rapidly above 10 watt)
Duty cycle - 1hr constant tx - no damage / moderate heat dissipation
Receiver sensitivity - better than -16uV over 0dB, typical -18uV over 0dB
Selectivity and spurious usually better than nominal
Transceiver rather "die" than produce lesser TX power than set - will shut down on moderate to flat batteries where voltage drops below certain level - this is due to constant SWR and POWER monitoring module - so for a portable work it is handy to have a power cut to the minimum (for example ASCOM SE550 will operate as long as it can despite significant voltage / power shortcomings).


SWR and POWER monitoring module will cut TX power in steps if SWR will go above 1.5:1 and cut to zero above 3:1 - RF PA is very well protected (also by the thermocouple sensor, and TX TOT can be programmed in - here is disabled - no TOT).