A Moxon rectangle antenna for 4m by Ross G6GVI.

I've heard a couple of stations recently discussing using a Moxon rectangle antenna on 4m, but had to go looking in my books to discover what they were talking about. I turns out that it's an ingenious compact 2-element beam, originally designed for the HF bands, but easily applicable to VHF too.
It can be thought of as a close-spaced two-element array where the ends of the driven element are folded back, and almost meet the folded-forward ends of the reflector. Thus the width of the array is actually less than (only about 75% of) a half-wavelength. Another advantage of this antenna is that it may be fed directly with co-axial cable.

For the 70MHz band, it can be realised with a couple of lengths of wire stretched over a lightweight frame made of garden canes, for instance.

I was directed to the excellent Moxon antenna project website, which even includes an automated design tool to work out the dimensions for the chosen frequency.
Using 0.83mm enamelled copper wire, the suggested dimensions were as follows:

Calculated dimensions for the 4m Moxon
I used five sections of fibre-glass kite spar to support the wire: four long ones to define the corners of the rectangle, and a short one to support feed-point, and carry the weight of the co-axial feeder.
Offcuts of the fibre-glass were also used for the insulators which join the ends of the elements, and an electrical Lego-brick connector was used at the feed-point.
A wooden block was drilled to take the ends of the support spars, plus the U-bolt for attachment to the mast.
With this construction, the antenna is amazingly lightweight, and can be fitted right at the top of my thinnest mast sections without straining them. 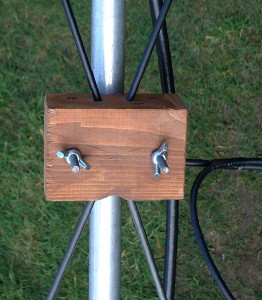 A wooden block forms the centre of my Moxon
Using the "first-cut" dimensions shown above, I measured a VSWR of around 1.3.
When I mounted the antenna horizontally on my mast for testing, a neighbour (who also has a G6 call) commented that it looked like a rotary clothes-line!
Listening to the GB3BUX beacon, I found that I had two sharp nulls at about 90 degrees to either side. I could also just hear the GB3ANG beacon (mainly via aircraft reflections) when I beamed to the North.

I'm now testing the antenna with vertical polarisation: the picture below shows it installed on my tilt-over mast, just above a Jaybeam 23cm dual yagi (at least it doesn't look like a clothes-line now!). 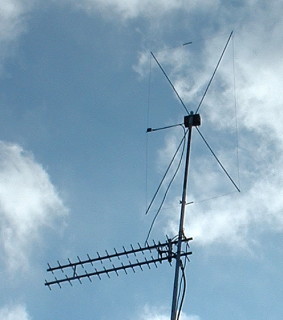 4m Moxon on test on the G6GVI mast


It also occurs to me that with its relatively short (compared with a full-sized half-wave) major axis, it might even fit vertically in the loft?
Posted by EI4DIB at 14:49