Background: The 70MHz (4m) band was introduced to South Africa in 2003. At present we only have SECONDARY STATUS, i.e. the band is shared with commercial users who have priority and we have to accept interference from primary users. On FM 12.5kHz channel spacing is mandatory.

ZS2EZ 70MHz OPERATIONS
Thanks to John ZS6JON, I obtained a Ranger commercial midband 16 channel FM radio programmed for the 70MHz band back in 2003 whilst living in Johannesburg. For an antenna I used a second-hand Webb commercial midband dipole, up on my tower at around 8m high. John and I were the first two stations active on this band in the Northern areas of Johannesburg (John lives in Krugersdorp, some 30km from my home in Jukskei Park), and utilized this band as a kind of "radio telephone". By the time I moved back to Port Elizabeth there were a few more stations around, but the band was still sparesly used.

Upon arrival back in Port Elizabeth, I found a number of local stations showing an interest in the 70MHz band. Many of these operators were using ex-miltary radios (which sounded terrible), but thanks to Ken ZS2OC many had equipped themselves with ex-commercial AS1000 and Pygmy radios. Ken was also supplying endfed vertical antennas and custom-made wire-and-aluminium beams (Ken referred to these antennas as "junglejobs"!). VHF enthusiasts Al ZS2U and Mike ZS2FM soon began experimenting with beams for 70MHz, and their keen promotion of the band soon saw the numbers of operators increase. An example of this can be seen in the distances recorded in the annual PEARS VHF Contest: during the 2005 event (the first to include 4m) ZR2DX and ZR2GLP achieved the longest distance of 11km on this band. In the 2010 event the longest distance was 1183km, between ZS2ACP in PE and ZS6WAB in Polokwane!!
For myself, I was frustrated at being restricted to FM-only operation. Others (notably Andre ZS2ACP and Paul ZS6NK) were experimenting with SSB and Digital operations, and I found myself ignoring 70MHz for several years. When my endfed vertical broke, I made no effort to replace it, and my 3 element "Junglejob" was left lying on the roof.

All this however changed in 2010 when I replaced my backup/6m radio, a Kenwood TS-570S, with a mint-condition Yaesu FT-847. Andre ZS2ACP very kindly did the 4m modification for me, and I ordered a 70MHz in-shack preamplifier from Spectrum Communications in the UK. On 4 August 2010 I tried my first 4m WSJT sked, with Paul ZS6NK in Polokwane. After the modification I get around 50W from the FT-847, and Paul was able to copy my signal. Unfortunately my antenna (the 3-el Junglejob) just wasn't quite good enough (a few very weak pings and fragments of callsign were all that was copied at my end).


Having established that my antenna was simply not good enough, I turned to my good friend Basie ZR2BA for assistance. Basie has just recently built a 5 element 70MHz LFA Yagi, from the design of G0KSC. I had planned to build one of these myself in the next few months, but quite simply was too pressed for time at the moment. Basie then kindly offered to build one identical to his for me. I managed to sneak a bit of time off work on Thursday 5 August 2010 to buy the necessary components, and on the afternoon of Saturday 7 August Basie delivered the completed antenna! He then helped me to put it up on the same pole that had supported the "junglejob", and the SWR read at 1.4:1 across the band - quite satisfactory! 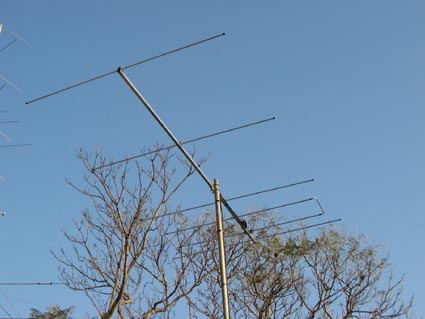 The antenna is fed with LMR400 (pigtail and choke balun is RG-213, joined to LMR400 via barrel connector just below u-clamps securing antenna to pole), and the flylead between the preamplifier and radio is also LMR400. A quick on-air test with Andre ZS2ACP showed that everything was working well.
The real test came on the morning of Sunday 8 August, when I had a sked with Paul ZS6NK in Polokwane (1 178 km away). This time my efforts were rewarded with solid 3dB pings almost immediately! The QSO was completed with relative ease, and towards the end lengthy bursts were received!

With the completion of my contact with Paul ZS6NK, Andre ZS2ACP called and worked him. During Andre's QSO Paul was even louder here than when I had worked him! Their QSO took a total of 3 minutes!!
During 2013 the LFA antenna was installed on my main tower, between my two Cushcraft HF antennas. This is at a height of approximately 55ft. Feedline is LMR400, with a Telegartner lightning arrestor in line just before the entry into the shack.