The Galway VHF Group 4 meter Gateway is located on a high spot in the Mervue area. The 4 metre Gateway is not intended to cover any more than Galway City and surrounding areas. We are happy enough if it just covers the townlands around Galway City such as Oranmore, Headford, Furbo, Moycullen, and Claregalway. Those with good antennae may access this Gateway from further afield.

The predicted coverage from RadioMobile map reveals just perfect coverage for our needs along with some addditional areas. City wide coverage and even coverage to Athenry, Kinvara and beyond Claregalway and further out from Moycullen has been confirmed by the use of the existing APRS coverage on 2 meters from this site. 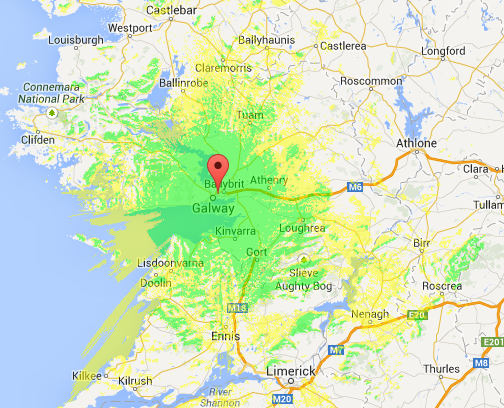 The 4 meter Gateway was built using a Kyodo commercial Low band Tranceiver. A Raspberry Pi ECHO/IRLP controller was added and the radio is fed into a 4 metre dipole located on the roof of the building. Nothing stunning or startling about this system; it is very simple. Remote control is also included if necessary to switch the Gateway off at short notice.

This is not intended to be a "DX machine" but merely an asset to bring in activity from other EchoLink or IRLP Nodes around the country or abroad. Some VHF Group members are often working elsewhere so this will provide an excellent opportunity to keep in touch locally. There was never really a plan for this to be used from a mobile operation point of view, but it would be possible. One does have to consider that to key in DTMF tones is neither conducive to good driving practice nor within the framework of the new Road Traffic Acts.

The 4 metre Gateway will be located on 70.425 with CTCSS access using 77Hz tones. Carrier access is a recipe for disaster as it is irresponsible to allow spurious opening of the squelch as so often happens. It is possible to chat away on channel without the tones switched on and the unit will not activate. If, however, somebody does access the Gateway, one can switch in the CTCSS tones and have a conversation with the operator concerned. Obviously it is better to monitor this channel without CTCSS tones switched in. This will enable local conversation on the same channel as well.

The Completed Project Prior to Installation: 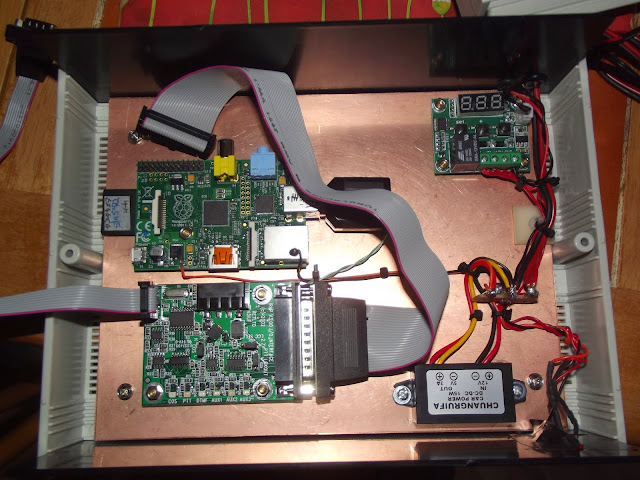 Here is the front panel with rig and fan sitting on top of the box. these will be mounted on a bit of Plywood for stability before installation: The LEDs just monitor 12V, 5V and the Fan voltage. A small temperature probe fits into one of the fins of the heat-sink on the Rig and, via the controller, switches in the fan if the the temperature of the heat-sink start to warm up. This is only a precaution against those with long overs. Below is a picture of the Kodo Tranceiver which has the power turned back to 12 watts although capable of 25 watts normally. There is only one simplex channel programmed into this tranceiver as there will be no need to change channels. The only mods required were to extract Audio from the Receiver to the Echo/IRLP Board, to inject Audio from the Echo/IRLP board, COR sense and PTT line. We chose this tranceiver as its performance and sensitivity are second to none. Note that this is NOT a Repeater but a Simplex Gateway - anyone transmitting into this locally will not be re-transmitted whilst the unit is receiving their signal. The antenna used for this project will be a Vertical Dipole. As can be seen we look after our local communications company! 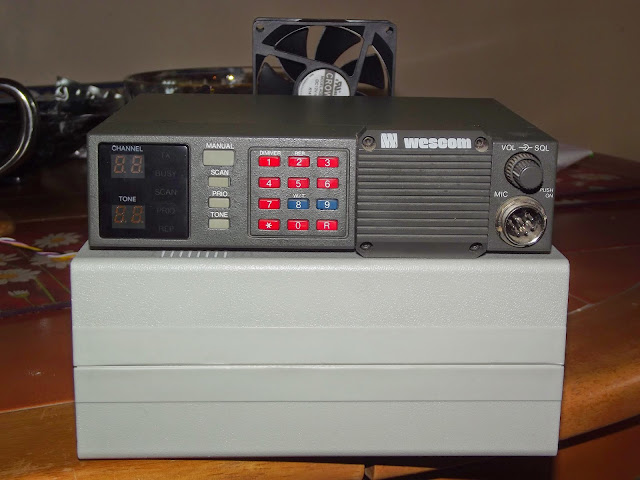 With both Echolink and IRLP it will be possible to connect to many Repeaters and Gateways around the world from a simplex tranceiver. Many foreign operators use this facility to speak to Amateurs in Co. Galway and surrounding areas. If you are abroad working or on  holiday, this will be the ideal system to keep in touch with home.