Dave is a very keen 4m operator and has many a great contact into his log, he puts me to shame with my humble 4m station, I can only aspire to his greatness..
Amateur radio station EI3IO established in 1997 is operated by

Dave Court
from Shankill, Co , on the east coast of . Shankill is a suburb of , just north of the Co. Dublin, Co. Wicklow border, lying between the coastal towns of and Bray.
First licensed as an amateur radio operator in 1963 as G3SDL, Dave has established stations and held call-signs in a number of countries, including F0CWN, OZ3SDL and S21BI. From February 2010 Dave has been operating from the ‘ of the Gulf’, Bahrain with the call-sign A92IO.

Here is some info on his station:
4m station at EI3IO IO63wf:
Yaesu FT902DM transceiver, 70/28 MHz transverter and home brew 50W amplifier. Antenna is a converted 6 element Create 50 MHz beam using DK7ZB dimensions. Direct QSOs have been made with 35 DXCC countries and
5 additional countries cross-band RXing on 50 MHz.
4m station at A92IO LL56fe
Yaesu FT101 transceiver, 70/28 MHz transverter, converted Tokyo High Power HL1K/6 amplifier running about 300W to J Beam 4 element yagi fixed at 220 degrees QTF during SpE season and turned towards ZS and V5 for the TEP seasons at the March and September equinox. As of now I've had QSOs with OK,, S5, SV and YO.
Summary of DXCC entities worked by EI3IO (IO63WF) on 4 m.
Mode: All mode 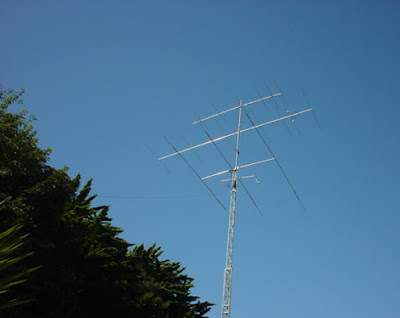 The picture above shows the current antenna configuration on the 20 metre tilt-over tower at EI3IO.
Currently the lower antenna at EI3IO is a 3 element Cushcraft A3S triband yagi at 20 metres agl. Above the A3S is an 18/24 MHz rotary dipole. The top antenna at 25 metres is a 6 element 70 MHz antenna fabricated from a Create 50 MHz yagi. Below the 6 element 70 MHz yagi is a 7 element 50 MHz 6M7JHV from M2.
Hanging from a cross arm at the top of the tower are a quarter wave inverted L for 1.8 MHz, which is also used as a 3/4 wave inverted L on 5 MHz as well as a 7 MHz Delta . Also suspended from the tower is a half-sloper for 3.5 MHz, which is additionally used on 10 MHz.
Also available is a 30 metre centre fed inverted V doublet, the centre suspended at a height of 22 metres above ground in a convenient tree. This antenna is fed with 600 ohm ladder line and is mainly used on the 3.5, 5, 7 and 10 MHz bands.
Dave’s website can be found at:
http://www.connogue.com/EI3IO/body_index.html
Posted by EI4DIB at 08:47