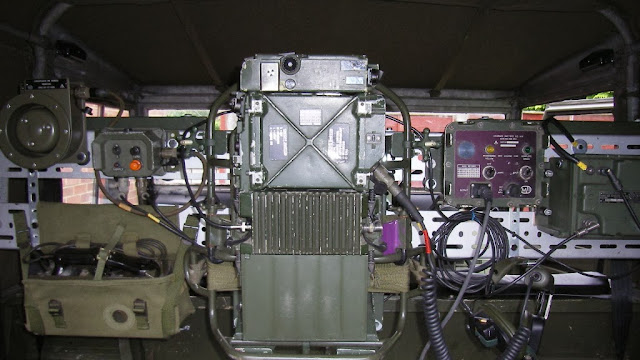 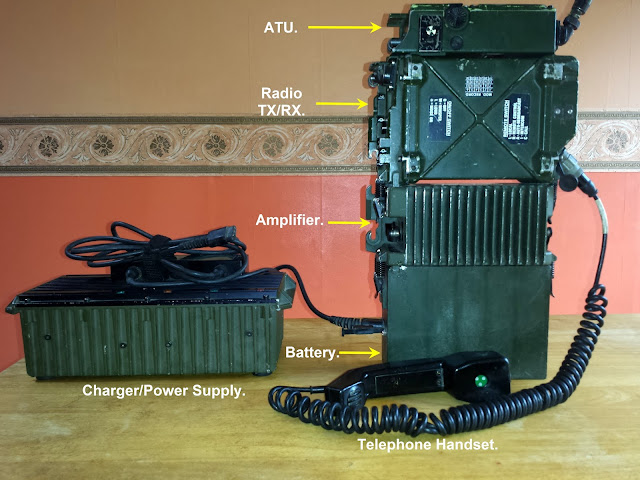 Clansman is an integrated HF/VHF/UHF communication system with standardised ancillaries spanning vehicles, aircraft and foot soldiers. It represented massive component and equipment design and development programmes.It was intended that Clansman would be in service in the early 1970s. However, the high cost of Clansman gear, the need to stock pile full sets of equipment and components before converting each army unit and the complexity of conversion and re-training caused delays. It was 1982, almost a decade after design, before ‘tail end’, regular army units in the UK were fully converted to Clansman. This is indicative of the delays in bringing complex, costly, high volume systems of new technology, into military service. Because of the delays, manpack radios such as the PRC-351 were often issued before conversion of an army unit to Clansman.
The RT-351 is the radio of the PRC-351. It was developed by Racal/BCC against a NATO requirement for a VHF/FM manpack radio with a range of at least 8 km (5 miles) over typical western European terrain. Its design dates from the early 1970s.
The basic PRC-351 replaced the Larkspur A41 and A42 radios. Like the earlier French TR-PP 13 a separate 20 watt RF amplifier AM-352 was provided for the PRC-351. The PRC-351 with the AM-352 fitted is designated the PRC-352 and replaced the B47 and B48.
The PRC-351 is fully transistorised and uses silicon transistors and integrated circuits (ICs).
It has a transmitter RF output of 4 watts nominal and provides simplex, narrow band FM, 5 kHz deviation communication, on any one of 1841 synthesised channels spaced by 25 kHz from 30 to 76 MHz in two wavebands. The set is tuned by four digital switches that select MHz x10, MHz, 0.1   MHz and 0.025 MHz. 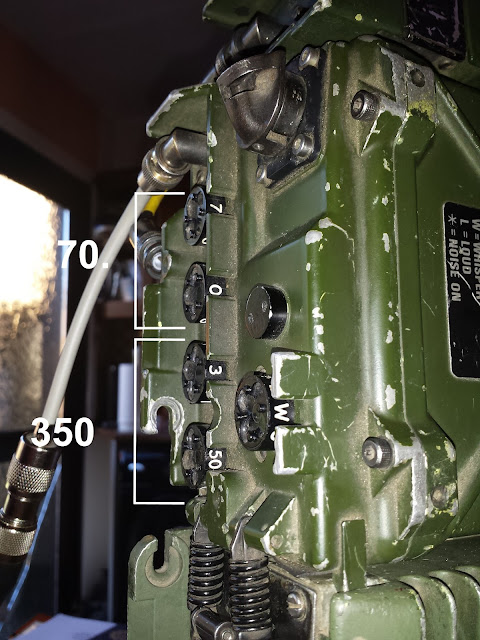 Auxiliary contacts of these switches automatically band switch so that band switching is transparent to the operator. A maximum frequency of 79.975 MHz can be set on the switches but the radio is aligned for 76 MHz maximum. A standard set should not be assumed capable of working above this frequency. No illumination of the controls is provided for operation in the dark. It was intended that the operator should be capable of changing mode and frequency by counting switch clicks.

The receiver is a single superhet with an IF of 11.525 MHz and a synthesised local oscillator frequency of signal plus IF. The IF strip has two crystal filters and, like the earlier TR-PP 13, a crystal discriminator. The first amplifier of the IF strip is a wideband IC that generates out of band noise. The second IF crystal filter removes this noise from the signal. Unlike early PRC-25s, the receiver RF input is protected from adjacent high power transmitters and can withstand up to 65 Volts RF rms without permanent damage. The 65 volts corresponds to a PRC-352 transmitting at a distance of 3 meters from the PRC-351.

PRC-351 Controls:
The PRC-351 controls are:
FUNCTION SWITCH
0 = OFF
W = WHISPER.
Used in covert type situations where noise must be
minimised. The microphone sensitivity is increased by
a factor of about 10 (20db) to allow the operator to
whisper and the audio output to the
headphones/handset is reduced by a similar amount to
reduce noise leak. Squelch is ON.
L = LOUD
Returns audio gains to normal providing high level
output compatible with the ambient noise in active
service. Squelch is ON.
* = NOISE ON
Disables the squelch/muting circuit so that there is
permanent audio noise output from the receiver in the
absence of signal. In the NOISE ON mode audio levels
are LOUD.
REMOTE SWITCH
L = LOCAL
The set is controlled as normal by the local operator.
R = REMOTE
The set is controlled by the remote operator.
A = AUTO-REBROADCAST
Allows the two sets to operate as a radio relay.
I = INTERCOM
Allows the local and remote operators to speak to each
other without their exchanges being broadcast.
C = CALL
Remote operator call. A loud call tone is applied to the
local and remote handset earpieces.

Batteries:
Initially power was normally provided by a 24V, 3.3 Ah rechargeable, NiCd battery clipped below the set with a life between charges of 12 hours on a 1:9 Tx/Rx ratio. As battery design progressed the battery became available in 4 Ah and higher capacity versions. The battery now generally issued is 'Battery Secondary Alkaline, 24 volts 4.0 Ah 6140-99-620-8057’. 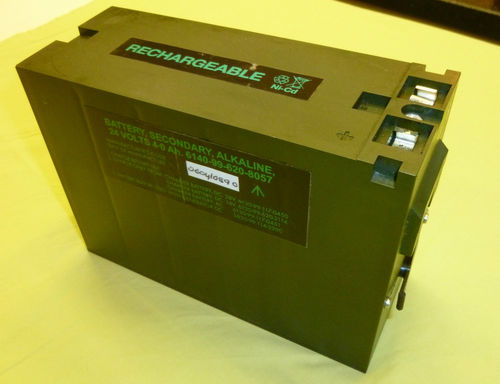 Amplifier:
The mechanically band switched 20 watt RF power amplifier AM-352 can be used with the PRC-351 in two ways:
a) Attached between the set and the battery and powered from the set battery. This gives a portage load of 10kg and a battery life of 6 hours.
b) With its own battery (i.e. two identical batteries are carried, one for the set and one for the RF amplifier).
This gives a portage load of 12.5kg and returns the battery life to 12 hours. The PRC-352 cannot be operated while it is being man portaged.The AM-352 has only a 50 Ohm BNC output
socket and can be only used with an external antenna using  a 50 ohm feed. 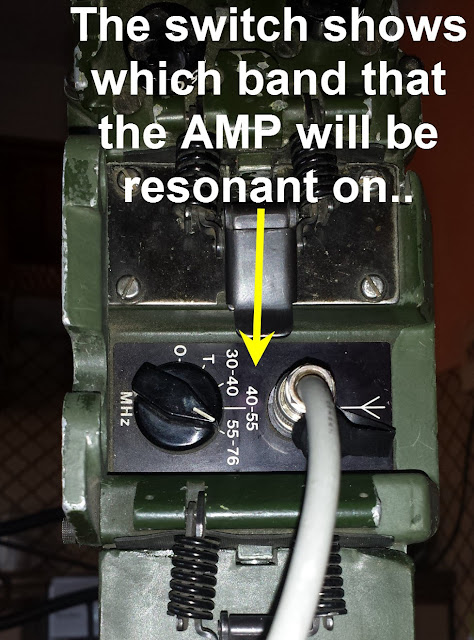 Set Mounted Antenna:
The PRC-351's RF output is 3 to 6 watts (4 watts nominal). This achieves set-to-set ranges of about 8km with 1.2m set mounted whip antenna. (Note: this is a similar range to the A41 on a 3.5m antenna. In crude terms the antenna length has been reduced by a factor of 3 to reduce its conspicuousness and awkwardness and the RF power output increased by 3 to compensate).
The PRC-351 whip is (5995-99-661-6201) a 1.2m, 4 section, self-erecting, rigid tubular type with a spring loaded, ball joint in its bottom section to limit damage from mechanical
impact. This is a quick release antenna which has a small prong offset from the main part of the antenna connector, this fits into the socket at the side of the radio/ATU like you would insert a key into a lock. Then this is held in place by screwing down a locking nut on to the socket. 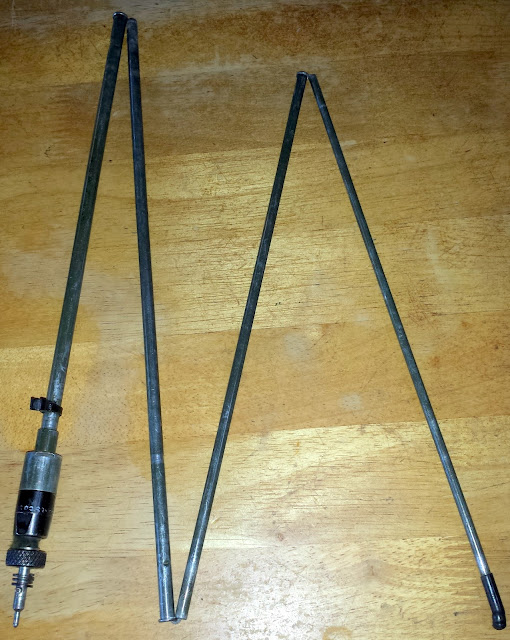 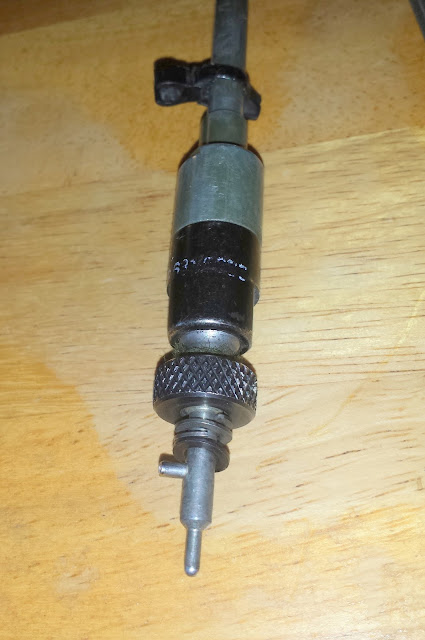 SURF:
The tuning unit sits on top of the transceiver and handles 4 watts or so, the tuner consists of a BNC input each side for input and output as well as the quick release antenna socket for the Clansman’s antenna.
Tuning the antenna is a very simple process, either the quick release or an antenna attached to the tuner, there is a plastic wheel on the side of the tuner and also a pull down flap to reveal a small dial, to tune the antenna just turn the wheel while transmitting on desired frequency and peak the meter for maximum.
This tuner is only to be used on the radio itself and should never be used with the amp in line. 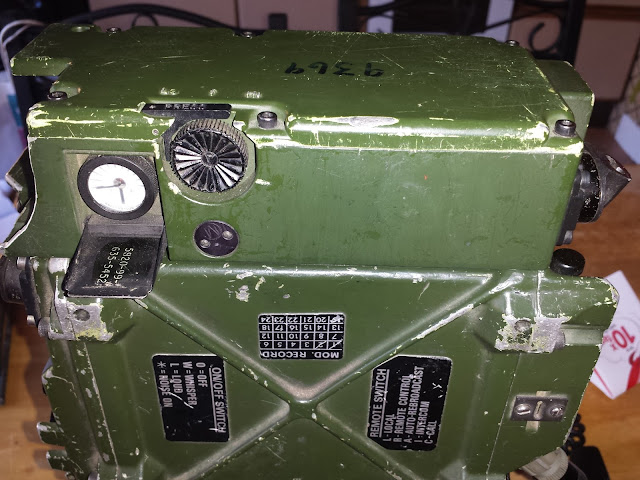 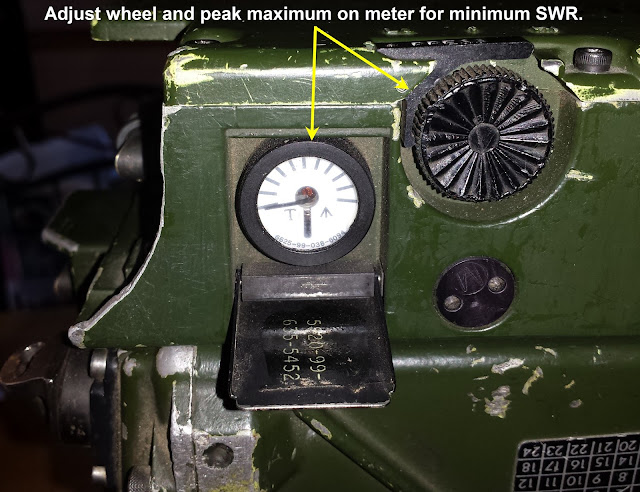 Charger:
Two leads are capable of recharging two batteries independently. This is a fully automatic device (microcontrollers on board, no LCD display, just LED signalling to keep things robust and simple) and will test the battery against its state of charge and general functionality, recharge and switch off whenever it’s ready or come up with a fault in case of battery failure, supply voltage low or internal charger fault.

It will work off 100-240V AC (Irish AC lead supplied) or 11-32V DC (cigar lighter socket lead, double standard thin/thick cigar plug lead supplied) so you may recharge 24V batteries from virtually any source at home or in the field. For example a 12V battery system in your car is fine to recharge your 24V clansman battery due to DC-DC converter incorporated in this charger.

The charger is not only a charger - this is also a 9amp 24V power supply - channel 1 will work as a power supply after depressing the button located in the middle between ch1 and ch2 leads (rubber dome). An orange light should come up during power supply mode on ch1. To work off a 9 amp power supply you should still have a battery attached to the transceiver and charging lead set into the battery. Ch2 will still work as a battery charger. PRC351 in transmit mode will draw about 2 amp with the linear on so there is a plenty of reserve power. 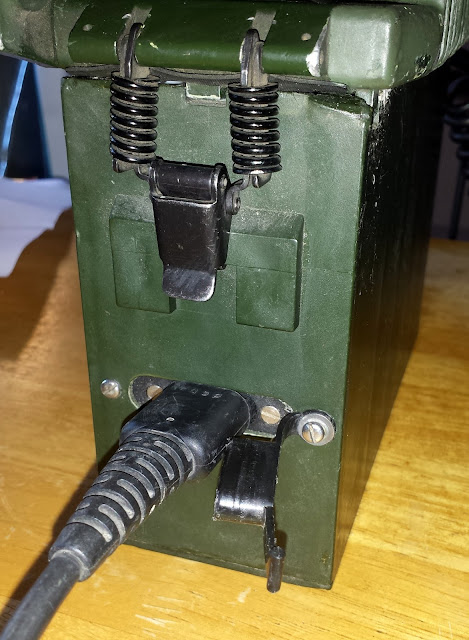 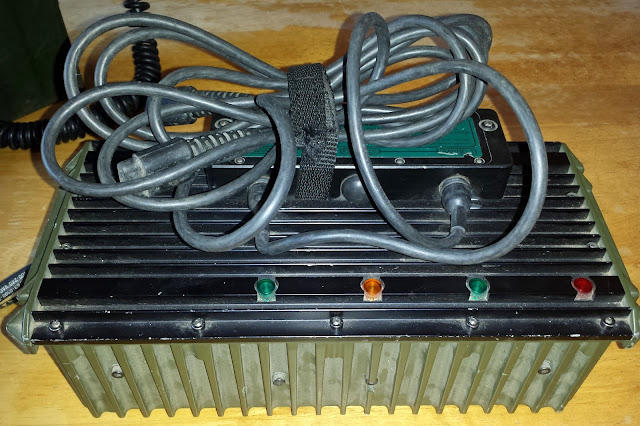