My Clansman has been working very well since I replaced the lead for the handset and as I mentioned before I am very impressed with the research and development that has gone into the design of the radio.
The Clansman that I have has the 20 watt amplifier added to it which is very handy when attached to an outside antenna. I get 4 hours or so running the radio on the 20 watts, this got me thinking of the only downside of the Clansman for me, the fact that the antennas are not tuned for 4m or 6m and need to run through the SURF (Selector Unit Radio Frequency) on the top of the radio, also the SURF will only handle the 4 watts from the radio so when I go portable with the radio I will not be able to use the 20 watt amplifier without connecting it to an external antenna.

I would like to be walking with the Clansman on my back and able to run the 20 watts at the same time. I decided to make an antenna base which I could leave on the Clansman and would connect directly to the amplifier which has BNC input and outputs.
I had a look at the radio for a place to attach the new socket and decided that the best thing to do would be to have a metal plate “sandwiched” between the top of the radio and the bottom of the SURF, the reason for this is that I did not want to modify the radio itself and this would be easier to fit. I also wanted to use my existing 4m stainless whip antenna off my car and wanted the antenna to be behind the radio sloping away instead of out to the side as the existing antenna is, I found this to be annoying as it would catch in branches etc. while walking, if it is to the back and sloped behind it would not get caught so easy……
Firstly I removed the SURF from the top of the radio and placed it on a piece of cardboard to make a template, then after sourcing a piece of stainless steel I set about shaping and drilling the holes, 3 for the screws and one for the antenna connector, making sure that the antenna base would not hinder the opening of the SURF window. When the holes were done then I put a 5 degree bend on the plate so that the antenna would lean away from the radio. 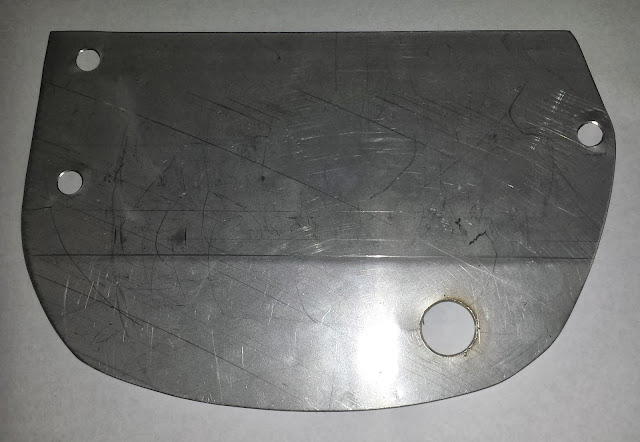 I then attached the plate to the radio simply by sitting it on top of the radio itself and by placing the SURF on top of that again, the three existing screws on the tuner fitted through the holes on my stainless steel plate and when tightened down holds the plate firmly in place, I am very glad that I put the bend on to the plate, if I left it flat it would have prevented the flap for the window to be opened….
A SURF (Selector Unit Radio Frequency) is used to prevent interference to operation of the radio sets. The SURF is an electrical filter, designed to reject unwanted interference from other radios when operating in close proximity to each other. The SURF is tuned using a manual control on the front of the unit, so that only the frequency in use, and those close to it, are accepted by the set. A Range of SURFs were provided for attachment to the VHF PRC350, PRC351/2 (SURF 4 Watt) 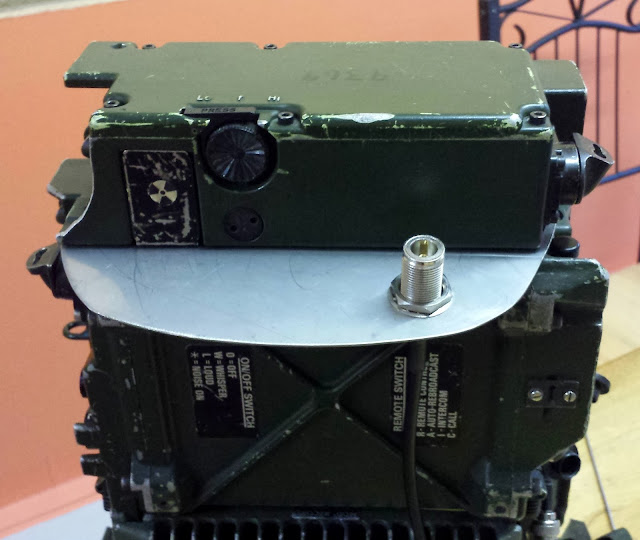 Setting up the rest is straight forward, I attached the antenna base, I looked around for an SO239 base, did not have one but I did find an N-Type socket with a short length of coax with a BNC plug on it. The antenna socket was attached to the plate; the short length of coax was a nice length and reached the OUTPUT of the amplifier easily. Then another length of coax was needed to reach from radio OUTPUT to amplifier INPUT, BNC’s both end, this was fed around the back of the radio between the radio and the backpack. Once this was done I connected up the antenna to the N-Type, the antenna itself terminates in a PL259 so an adaptor is used on the antenna/base.

I attached the antenna and checked the SWR, it reads around a 2.0-1 but shows a good RF output of over 20 watts. I played around with the antenna connected to an Antenna Analyzer and found that by adding more length to the whip I achieved a flat SWR, so my next purchase will be a longer whip for the radio…. 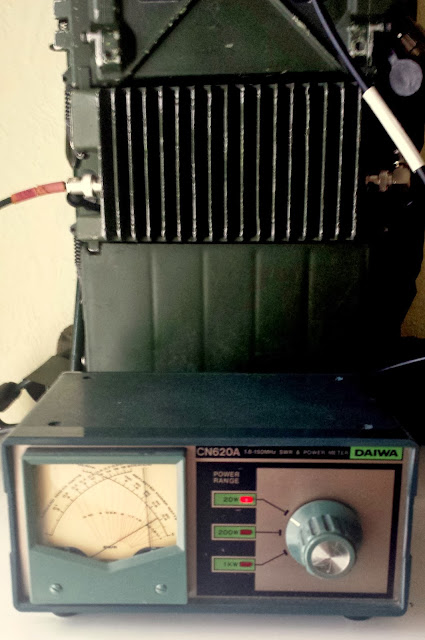 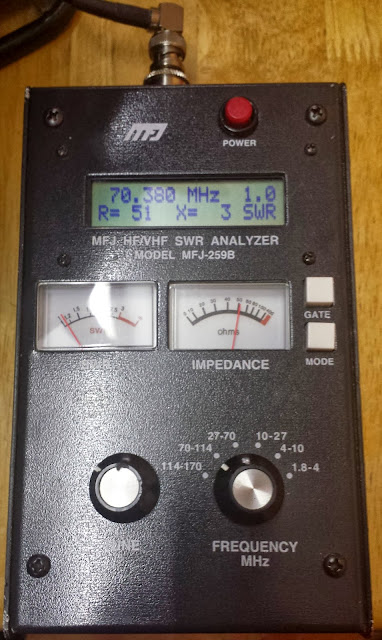 I hope to do some on air testing soon while out portable and it will be interesting to see how the 4m whip will work on the radio, I also have a mobile Tri-Band (6m, 2m and 70cms) antenna and this tunes perfectly on 6m, so I will be now able to use pre-tuned antennas on the Clansman which will mean that on 4 watts the radio should have a better range and should be even better with 20 watts!!!!

For more info on the Clansman click on the following link:  Clansman Radio.
Posted by EI4DIB at 21:57