Simple comparison of the Ascom SE550/Philips FM1200 By Andy GJ7JHF.

This page is just for a very simple comparison of the Philips/Simoco FM1200 (a particular model number within the FM1000 range - very confusing!) against the other common 4m (70MHz) radio available these days, the Ascom SE550. Both radios are ex-PMR conversions that require external speakers.

The owner has stuck on the labels A to H in an effort to make it easier to use with the manual. I have taken the chance to photograph the radio while the radio is currently with me. The owner has let me play with it for a week or two while he's away, so that I can turn off the loud beeps it had as supplied, and other annoyances set by mistake.

At 182 W x 58 H x 250 D (mm), the FM1200 is 3 mm taller, 12mm wider, and considerably larger backwards than the Ascom by some 75mm (complicated by protruding knob and sockets). The FM1200 has an LCD display which I suspect (just a suspicion!) may have a longer life than the light-emitting one on the Ascom. Time will tell. Mind you, the back-light bulb will probably go first. 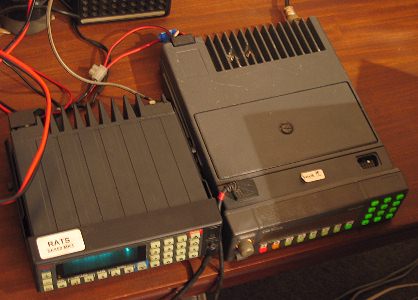 The FM1200 has a rotary volume control, which is a digital affair that switches between fixed levels.

The FM1200 has a signal meter, which is the main operating advantage over the Ascom. Tuning with the up and down buttons takes you all the way down to 0 MHz and then wraps around to 299.975, and you may enter any frequency in this range too. While it would be nice to punch in a 2m channel, 51.51 or 29.6 sadly (as you'd expect!) you're not going to be able to receive anything in most of this range, let alone transmit there. A quick scoot about with the signal genenerator revealed that reception of any sort at all is going to be limited to the high 60s to very early 90s (MHz). 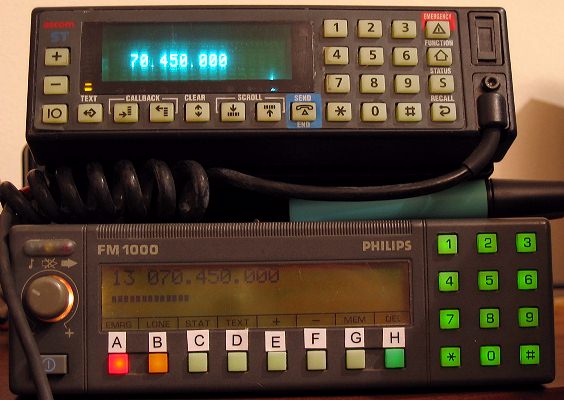 The FM1200 has a physical (clicking) on/off switch which is a good and positive, but there's a loud thunk on the speaker when it's first switched on. This probably means it doesn't draw any power when off, whereas the Ascom does draw a small amount and needs just the right quick press to switch on (but at least there's no clunk).

Apart from that the differences in use are minor, as they both use variants of the same software and it's very similar to program the various settings through the same menus and submenus. The green button H is used for this, along with 0 and #.

Once the beeps are turned off and other settings are to your liking, you'll probably only use buttons C and D to go down and up the channels (why not E and F that are actually labelled with + and - ?!), and F to jump back to the calling channel. # would be used for reverse repeater shift. If you bother with memories, then * would be used for scanning, and G for switching between VFO and Memory Mode.

Sensitivity seems very similar. Without any 4m activity over here it's hard to compare the two in Real Life, but on a web forum G7IVR reports that in his opinion the Icom E90 is more sensitive than either of them, then the FM1200 beats the Ascom. I keep an open mind considering how one radio (even the same model) may vary from the next due to the alignments. He may have a good example of an FM1200 and a poorly aligned Ascom. I would expect a commercial amateur radio to outperform a PMR radio because I don't believe mobile PMR radios are required to be fabulously sensitive due the users requirements - the coverage area is usually well served by a well sited base antenna. The usual design compromise is probably weighted more towards handling strong signals gracefully without overloading, whereas amateur radio manufacturers know they have to make their kit as sensitive as possible to keep the fussy hams happy - with the usual result being that they overload way too easily. You can't have both!

I decided to try a sensitivity test. This was complicated at first because with a dipole connected the FM1200's S-meter jumped up some way due to all the noisy RF mush from a whole host of nearby computers. There's no point testing sensitivity unless your location is quiet (low background RF levels) as almost any halfway decent FM receiver is likely to be much the same as any other at picking out a signal among a high noise level. However, connecting a random length piece of COAX (an old network cable) to the FM1200 showed no change in signal level (and no change in sound with the squelch off) from having nothing connected. By placing the far end of the cable on my signal generating device (something putting out a low clean carrier on 70.45) I got a good quiet signal. I then moved the cable about 6" away from the signal generator until it was like a very noisy weak signal that would have been right on the limits on usable reception if it had been modulated. This was very stable, could be verified easily be turning the device on and off, and didn't change in level at all as I moved around the radios and unplugged the lead into both radios to compare. And the conclusion was that both radios resolved this week half-quietened signal equally well, the difference in noise levels between being connected or not sounded the same on both the FM1200 and the Ascom. That's as scientific as it gets with the facilities at my disposal at the time, but I'm happy enough that my Ascom is on a par with the borrowed FM1200. (bear in mind that 70MHz (like 50MHz) is apparently a lot noisier than 145MHz and 433MHz, so you'll probably get an increase in noise levels when you connect your antenna anyway unless you're lucky to live in a good quiet area)

Modulation and TX audio quality are very different, on the stock microphones as supplied with the radios. I transmitted on both to a friend with a receiver, and I had my Ascom audio reported very favourably as loud, full, and clear. On the FM1200 I was "thin and quiet and mouse-like". A lot of this may be due to the deviations being set for 12.5kHz v 25kHz channel bandwidths, but I'd need to do further testing. I prefer to be heard well, especially as I'm often told I'm too quiet, so the Ascom scores here for me. If anyone says I'm too loud I'll just talk further away from the microphone. This is far better than chewing the thing and still worrying whether you can be heard or not!

So personally I prefer the Ascom so far, because I can be heard, it's smaller, and looks nicer in my opinion, but it may be simply because I got to know that radio first before I clapped eyes on the other one! Size is important though, the Ascom seems small enough that I could easily keep one in a bag and take it out in the car once in a while - whereas the FM1200 is so much bulkier and heavier it really could make that borderline difference as to whether I would bother or not. An S-meter would have been nice on the Ascom though :o)

Sorry I can't help with any queries - for technichal questions please try the Yahoo group above, or www.70mhz.org