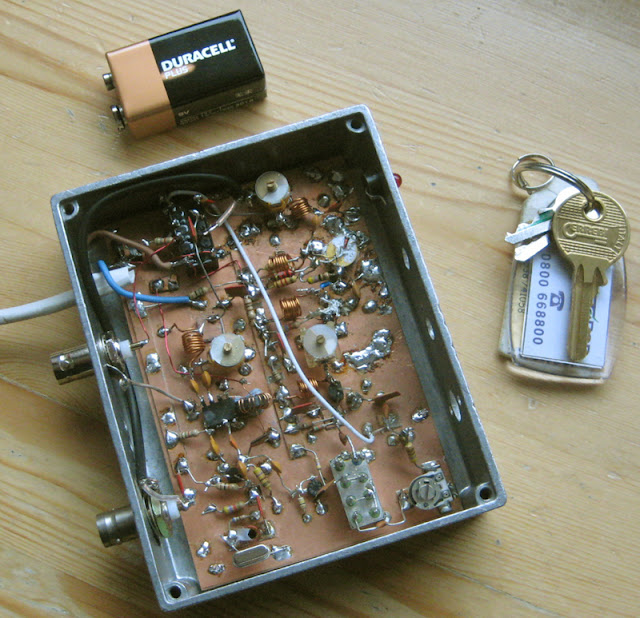 The Design:
There is almost no commercial equipment for the 4m band and certainly almost nothing from the traditional Japanese manufacturers, although the new IC7100 has 4m coverage.

So, to get on the band it was necessary for me to design and build a simple transverter. 4m is not a difficult band to build for and I already did a transverter design some years ago for 6m, so a 4m one has been straightforward. However, I lacked test equipment for that part of the spectrum other than a signal generator. My scope does not go that high and I don't have a proper receiver for the band yet. So, some improvisation was needed to check the build as it progressed. I still need to check it on a spectrum analyser at a friend’s house.

Receiver:
For the receiver the NE602 is suitable as an RF preamp and mixer. These are cheap and pack a lot in a small DIL8 package. A suitable design appeared in the latest edition of SPRAT down-converting to 20MHz. In terms of noise figure and large signal handling, I think they will be adequate, although a BF981 or similar may be better as an RF amp and mixer. The first parts assembled were this RX down-converter.  At switch-on it immediately worked copying the GB3BAA Tring beacon 89km away using my 10m halo as the (inefficient) antenna. Sensitivity on my generator looked fine. There is some out-of-band breakthrough as a result of the minimal selectivity in the front end and this may need to be addressed later with better input filtering, but has not been an operational issue yet.

Transmitter:
In the end I went for an SBL1 passive double balanced mixer as I've used these before. Any similar DBM would be suitable. This is followed by a BF199 pre-driver (probably a 2N3904 will do here), a ZTX327 driver (a small Ferranti/Zetex device ex PMR) and an MRF237 TO39 RF PA (also ex-PMR). The TX strip was aligned initially using a 70MHz drive signal from a signal generator with trimmers between each stage. When optimised, some of the trimmers were measured with an LC meter and replaced by fixed value caps.  This could also be done in the PA output PI filter too. Output is about 1W pep. More may be possible by optimising the PA load. Adding the TX mixer and driving from the 28MHz source the power was the same with just a minor change of position of the tuned circuit in the pre-driver output. The TX strip is both stable and linear although the bias resistor values may need optimising. keep the diodes used to bias the driver and PA in thermal contact with their respective transistors. A relay is used to switch RF paths between RX and TX and this is activated by a DC 5V available at the FT817 after a simple mod to the rig. This mod requires the addition of one wire from the TX 5V line, a 10nF capacitor and a 10k resistor. It is described visually on this site http://www.bergtag.de .   Power output is greater than 1W pep, but by careful design improvements more than 2W should be possible.

At present, the TX DC supply voltage remains on during RX and the RX voltage during TX. In due course I may address this with some DC switching too at a later date.

Several people have asked me about L1.  L1 was a small 2 pin 4mm diameter coil with around 10turns of 0.2mm wire with an F29 core. It came from a PMR portable made by Philips. Its purpose is to ensure the crystal oscillates at 3rd harmonic on the right frequency. A technique that can be used is to remove the crystal (short it out) and make an LC tuned circuit (L1 and C1) that makes the "free running" oscillator oscillate at 42MHz. Then reconnect the crystal back in circuit and adjust either the L or C to bring back to 42MHz. It should be very close.
Antennas

For initial tests I put a wire dipole in the loft. A wire halo built in a similar way to my Homebase10 halo for 10m may be erected later. In fact I may nest a 6m and 4m halo within the existing 10m halo. These antennas work well and are ideal for summer sporadic-E openings. Sporadic-E openings can be strong. With stations on 4m widely spaced across Europe an omni-directional antenna at a reasonable height should be a good choice. A small yagi and more power would help inter-UK QSOs but I have no plans for this and will be content with local QSOs when the band is dead. Commercial yagis, HB9CV 2el beams and halos are available for the 4m band from several sources including Vine, Moonraker and Wimo to mention just 3. A 4m band halo is available from Waters and Stanton for under £30 when I last looked. In the short term, I am erecting a horizontal wire dipole in the loft.

Ideas from others:
Dom M1KTA pointed me to http://www.mydarc.de/dk7zb/Transverter/4m_Transverter.pdf which in turn links to http://www.qsl.net/dl5dbm/50MHzTr/50MHz1.htm but that has broken links on it. The web archive pages still has this information at http://web.archive.org/web/20100901080709/http://www.qsl.net/dl5dbm/50MHzTr/50MHz1.htm
There is also a Yahoo group for a project called the Eden9, a club project design for a 4m 1W pep SSB transceiver from Ron Taylor G4GXO. See http://groups.yahoo.com/group/eden9/ .

4m (70MHz) Information:
The best source of information about the band is at the Four Metres Website. Here there are tips on operating on the band and an up-to-date list of countries with access to the band. This list is growing rapidly with many more countries now having access to the 4m band. See also the Wikipedia article on the 4m band.

4m WSPR:
One thing that would be fun to try on the band is WSPR, a mode that I have used successfully on lower bands. I suspect that aircraft Doppler may make this less ideal on 4m though.