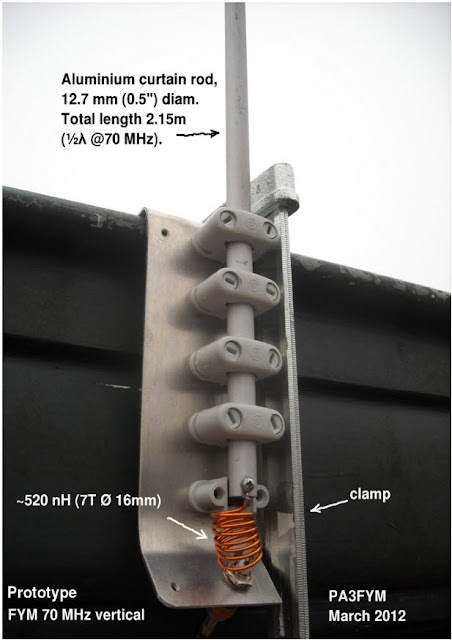 A surprisingly simple ½λ vertical for 70 MHz is presented.
The antenna consists of a 2.15m (half wave) aluminium tube/rod with a diameter of 12.7 mm (0.5”).
Contrasting with usual designs, matching towards 50Ω is realised with one series coil only.

Introduction:
As of January 1st 2012 70.0–70.5 MHz became available to the amateur radio service in
The Netherlands on a secondary basis. The 68-88 MHz band was allocated to the mobile service
(mostly police) and army. Therefore a lot of surplus (professional) VHF mobile transceivers are
available for reasonable prices. The easiest way to become active on 4 metres is to acquire such a radio,and tweak it to 70 MHz.
Of course, after tweaking a transceiver, the first thing you need is an antenna.
Accidentally I created a surprisingly easy to construct ½λ vertical for this band.
The design (short version):
A 2.15m (½λ @70 MHz) aluminium (Al) rod is fixed and isolated on an aluminium bracket. The first ~17cm of the Al-rod is in parallel with the Al-bracket. The distance between this part of the antenna and the bracket is ~10 mm. Matching  towards 50Ω is realised with one ~520 nH (7 turns Ø 16mm, length ~17mm) series coil. The antenna connector is mounted on the AL bracket. The coil may be tuned/stretched for Minimum VSWR.
That's it.

The design (long version):
I bought a 2.5m aluminium curtain rod, which Equals ~5/8λ @70MHz, from a local DIY-shop. Initially I made the 5/8λ vertical, matched it with A series coil, in conjunction with three 1/8 – 1/4λ radials. The antenna was mounted Temporarily on one of my dormers with a clamp, And worked fine.
During the first night there was a light storm, and the antenna blew of my dormer into the gutter.
Due to the length of the radials I encountered some difficulties to pull the antenna back through the
Window frame into my shack, and decided to go for a ½λ design without radials. I shortened the 2.5m rod to 2.15m (½λ @70 MHz). My initial idea was to match the ½λ monopole with
The popular 'GPA 27½ approach', i.e. a coil with a 50Ω tap. I calculated the coil, and the tap.
However, I did not obtain a satisfying match easily, and went for a π-filter. Because the 'end
Capacitance' of the π-filter was calculated to be only a few pF, I omitted it. As 'first capacitance'
(Parallel along the 50Ω side) I initially used a ~60 pF trimmer. The initial coil was the 5/8λ vertical
Matching coil, 6 turns Ø 16mm.
On 70 MHz the matching was poor. However, the contraption resonated around 75 MHz Increasing
The coil to 7 turns, and discarding the trimmer, resulted in a strong dip @~69 MHz stretching the coil
(i.e. lowering the inductance) gave a 'rock solid' VSWR 1 @70 MHz, measured at the antenna side.
Measuring the VSWR at the transmitter side revealed almost no reflected power at all.
To ascertain if the feed coax cable was 'part of the match' I changed its type and length (RG58 ~4m,
and Ecoflex 10 6.20m). It made no difference, the match remained very good.
Lacing up to five 4C6-toroids around the coax at the antenna side had no influence either.
So, this had to be a 'real', and not an 'imaginary' match.
With ~10W output I was/am able to make contacts within a radius of ~25 km (there is very little
Activity yet) with a minimal antenna height (~7m above ground), so the antenna radiated/radiates well.
But... I had an inconvenient feeling: “Why do I have a match with only one series coil?”
The antenna is an end fed ½λ monopole which must have a high impedance (Z) at the feeding point.
I suspected that 'the parallel to ground part' of the ½λ monopole created a capacitance.
With a coil in series a LC-matching network is created (Fig.1).

The capacitance of the ~17cm 'parallel part' was calculated to be ~10 pF, which generates a match
@70 MHz for Rl = ~1070Ω. The impedance of a ½λ monopole is approximately its radiation
resistance. The calculated radiation resistance of a 12.7mm diam. ½λ monopole @70 MHz is ~1150Ω.
My derived/estimated impedance of the ½λ monopole is Z = ~ 1040 – j260 Ω (see figure 2).
Although this match was created accidentally, the match itself it not an accident.
The measured VSWR 2:1-bandwidth amounts ~ +/- 2 MHz
The result is a surprisingly simple ½λ vertical for 70 MHz, and eliminates excuses not to become active on four metres. Of course the coil can be mounted in line with the rod, and wound around a plastic support for mechanical or other reasons (e.g. weather). Your mileage and experiments may vary. 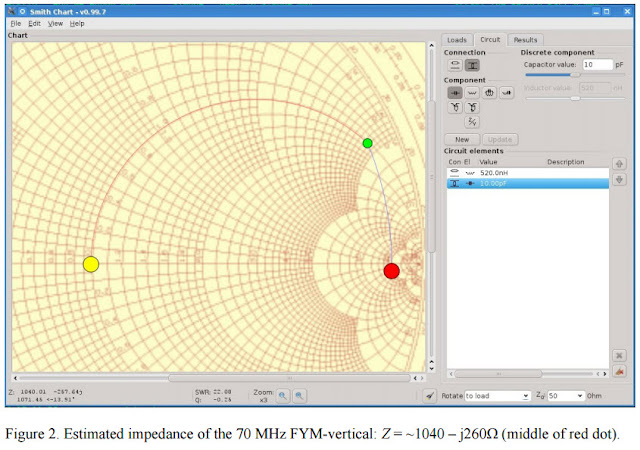