History:
Before World War II, British radio amateurs had been allocated a band at 56 Mhz. After the war ended, they were allocated the 5-meter band (58.5 MHz to 60 MHz) instead. This only lasted until 1949, as by then the 5-meter band had been earmarked for BBC Television broadcasts.

Allocations:
A chart showing how Television channel frequencies in various countries relate to the 4 meter amateur band.
In addition to the traditional users (United Kingdom, Gibraltar and the British Military Bases in Cyprus), an increasing number of countries in Europe and Africa have also allocated the 4-meter band to radio amateurs as a result of the decline in VHF television broadcasts on the 4-meter band. Movement away from the old Eastern European VHF FM broadcast band and migration of commercial stations to higher frequencies have led to slow but steady growth in the number of countries where 4-meter operation is permitted. 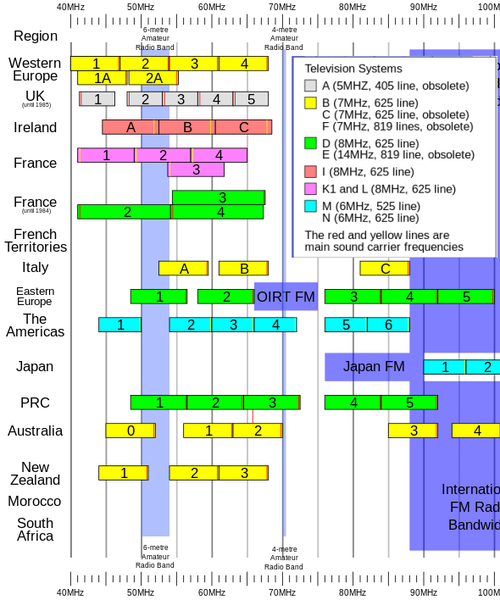 Whilst not formally allocated at an ITU or Regional level, in Europe CEPT now recognizes the increased access to 70 MHz by radio amateurs with footnote 'EU9' which has helped underpin further growth. In July 2015 CEPT updated this footnote to fully recognize it as a formal secondary allocation:

"EU9: CEPT administrations may authorize all or parts of the band 69.9-70.5 MHz to the amateur service on a secondary basis."
In practice this ranges from 70 MHz to 70.5 MHz in the United Kingdom, with other countries generally having a smaller allocation within this window. In most countries the maximum power permitted on the band is lower than in other allocations to minimize the possibility of interference with non-amateur services, especially in neighbouring countries. A table with national and regional allocations is published and regularly updated on the Four Meters Website.

Propagation:
The 4-meter band shares many characteristics with the neighbouring 6-metre band. However, as it is somewhat higher in frequency it does not display the same propagation mechanisms via the F2 ionosphere layer normally seen at HF which occasionally appear in 6 meters, leastwise not at temperate latitudes. However, Sporadic E is common on the band in summer, tropospheric propagation is marginally more successful than on the 6-meter band, and propagation via the Aurora Borealis and meteor scatter is highly effective.

While Sporadic E permits Europe wide communication, it can be a mixed blessing as the band is still used for wide bandwidth, high power FM broadcasting on the OIRT FM band in a declining number of Eastern European countries. Although this has lessened in recent years, it can still cause considerable interference to both local and long distance (DX) operation.

Equipment and power:
Access to the 4-meter band has always been limited by access to suitable 4-meter transceivers. A limited number of transceivers were purposely built for amateurs on this band while converted Private Mobile Radio equipment is in widespread use e.g. Phillips FM1000 and the Ascom SE550. Some low power FM commercial equipment is available for the band although it is of relatively simple specifications as generally suitable for communication of up to around 50 kilometers (31 mi) or so with simple antennas.


In the Sporadic E seasons communication around Europe is possible with such equipment. Currently, the only Japanese-made, "mass-market" amateur radio transceiver to cover the Four meter band as standard is the Icom IC-7100, previously there was the UK specification Yaesu FT-847 which was discontinued in 2005. As a result, many 4-meter users gain access to the band by using converted "Low band" VHF ex-PMR (Private Mobile Radio) transceivers but invariably these only have either AM or FM and those users who prefer to have a multi-mode capability but can't afford a second hand Yaesu FT-847 normally use transverters, either purposely built home builds or sometimes even converted 6-meter or 2-meter versions.

Recently (2014) a Monoband Multimode 70 MHz SSB/CW transceiver is released by NOBLE RADIO. Their website is www.nobleradio.eu.

Activity:
In some parts of the UK the band is little utilized, while in others, notably Belfast, Bristol, South Wales, North London and Hertfordshire, there is extensive local FM operation. There is considerable 4m activity along the east Coast of Ireland, mainly 70.400 FM. Also there are a number of Gateways/Links and Repeaters now operating on 4m which can be a handy form of FM Beacons. As band occupancy is relatively low, FM operation tends to take place on the calling frequency, 70.450 MHz, and AM operation on that calling frequency, 70.260 MHz. In the UK, the band is also used considerably for emergency communications, Internet Radio Linking Project links (IRLP), data links and low powered remote control.

In continental Europe the band is still primarily used for more serious DX operation. Cross-band working between the 6-meter band or the 10-meter band is common to make contacts countries where the band is not allocated.

Countries in which operation is permitted:

In "experimental" countries, authorities authorized amateur radio experiments on the band for a limited period of time.

Other:
United States has one experimental transmitter in Virginia transmitting CW on 70.005 Mhz. Call sign is WE9XFT.
Glen Zook, K9STH, the Head Moderator of QRZ.com and a longtime magazine writer on VHF related topics, filed a petition with the U.S. Federal Communications Commission on 27 January 2010 to create a new U.S. 4-Meter amateur radio allocation at 70 MHz to parallel those in Europe and other parts of the world. [20] This petition was subsequently rejected by the FCC.
Common uses of the 4-meter band
FM Simplex
AM Simplex
Packet radio
SSB voice operation
Morse code (CW) operation
DX